We are at the fairgrounds in Fort Walton Beach, Florida to attend an RV Rally. Not only is there no Fort here, there is no Beach.

George Walton, born 1749, was a signer of the Declaration of Independence as a delegate from Georgia. His son, also named George Walton (some people are just not very imaginative), born August 15, 1786, was a Colonel under General Andrew Jackson during the 2nd Seminole War. He was named Secretary of Florida under Governor Jackson. Walton County was named for him.

The only interesting thing we found at Fort Walton Beach was the restored one room school house, built in 1912, that housed grades 1 to 5.

As it turns out, I am not smarter than a 5th grader. 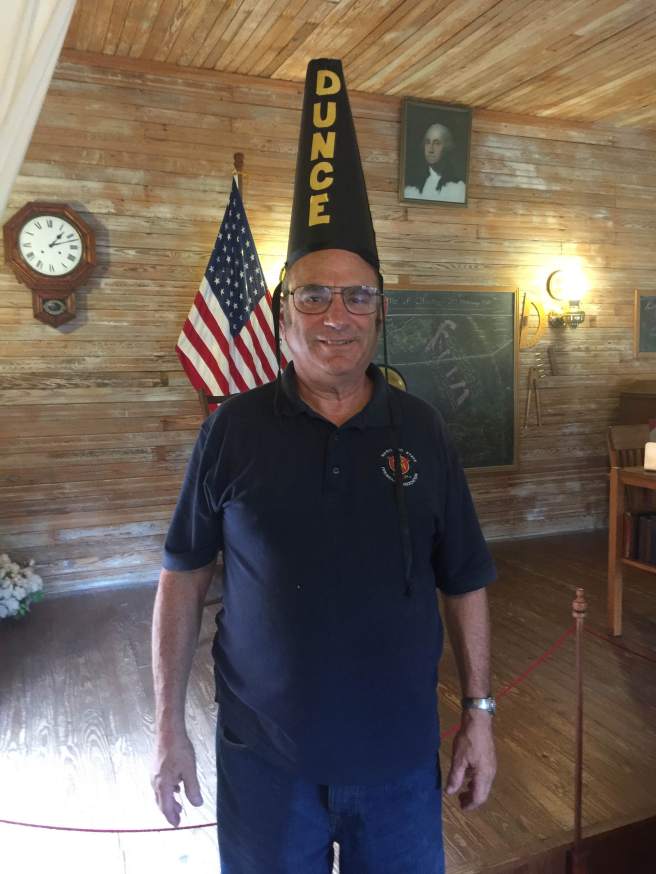 You are really old if your grade school Report Card looked like this: 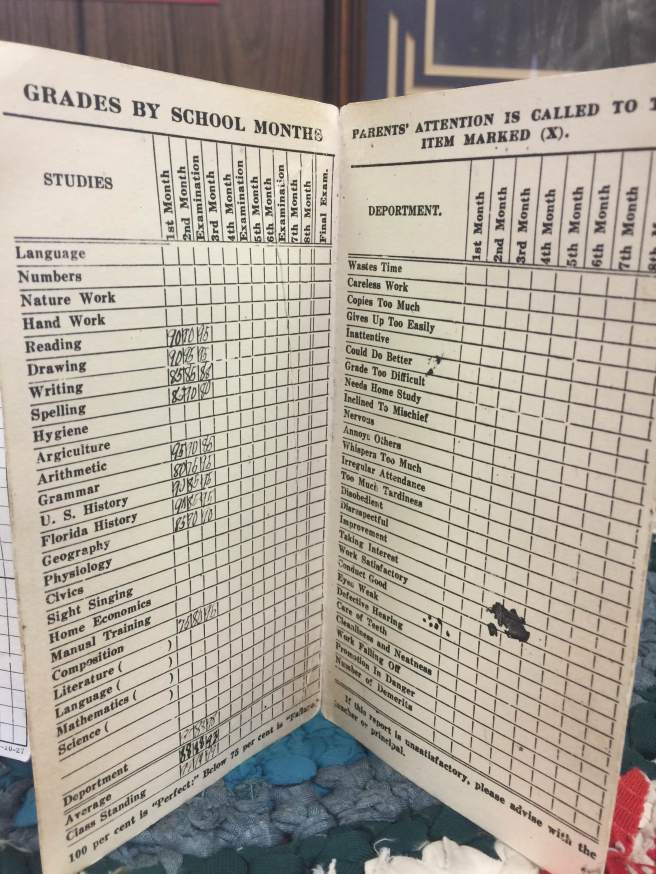 Our campground is located on the Indian Bayou. We decided to go canoeing on the Bayou from our campground, even though we had never canoed before. 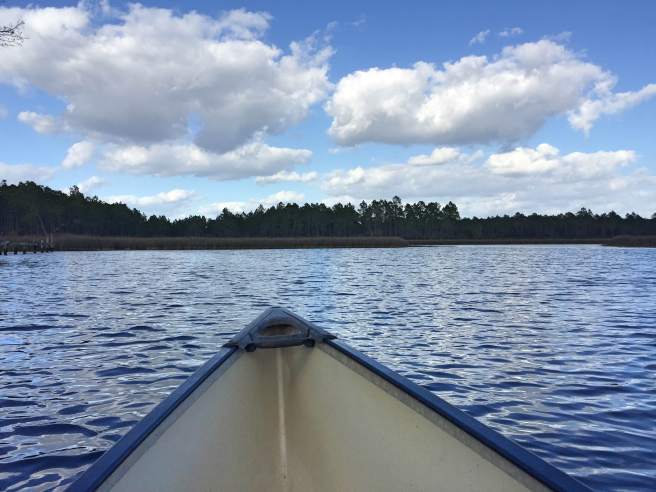 Fortunately, the water was very calm. We paddled for about 45 minutes up the Bayou when he saw a large splash in the water just ahead of us. We saw bubbles coming out of the water from the shore to the middle of where we were paddling. We figured it was either a large turtle, or an alligator. We quickly made a 180 degree turn, and began paddling back down the Bayou.

We did see some wildlife (other than the turtle or alligator). 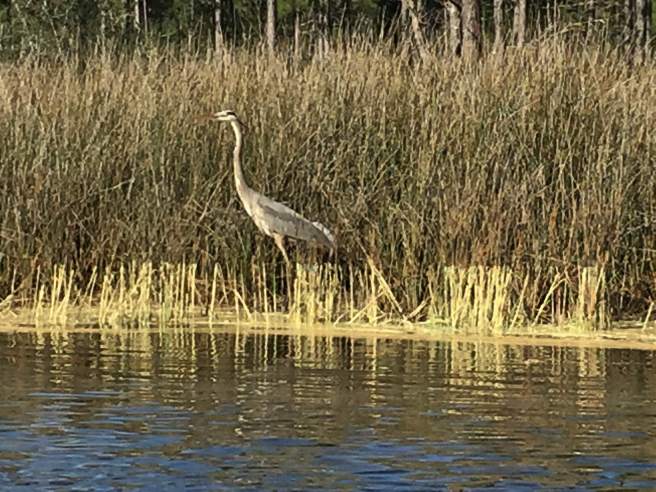 The Air Force Armament Museum, adjacent to Eglin Air Force Base, Florida, is the only facility in the U.S. dedicated to the display of Air Force armament. Founded in 1975 it was originally located on Post, but move just off Post in 1985.

The leader of our Alaska trip was with us. He was a Combat Control Specialist in the Air Force, the equivalent of the Navy Seal, during Vietnam and recently retired as a Rocket Scientist with the Department of Defense at Redstone Arsenal in Huntsville, Alabama.

He explained to us all the airplanes on display from Vietnam to the present, including the Black Bird, the high flying reconnaissance plane.

Another cool thing in the museum was this Norden Bomb Site. Developed by Carl Norden, it was used in World War II in the B-17 bombers. Although I have heard about it, this is the first time I saw one. 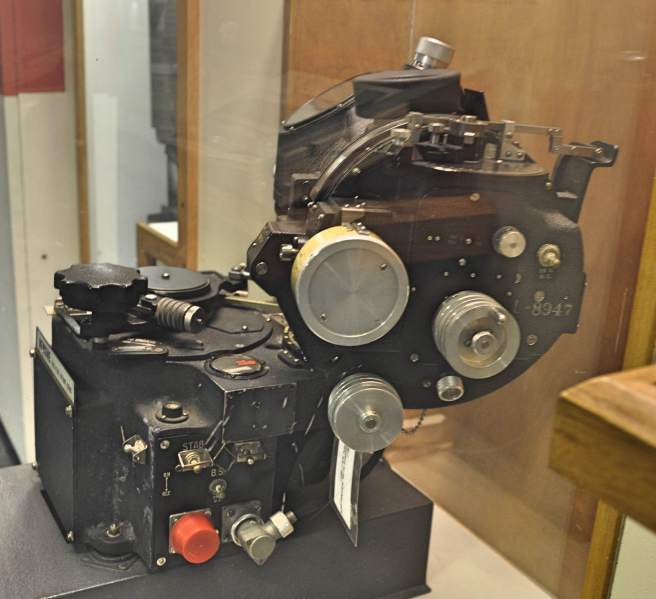 In tribute to one of my faithful readers: 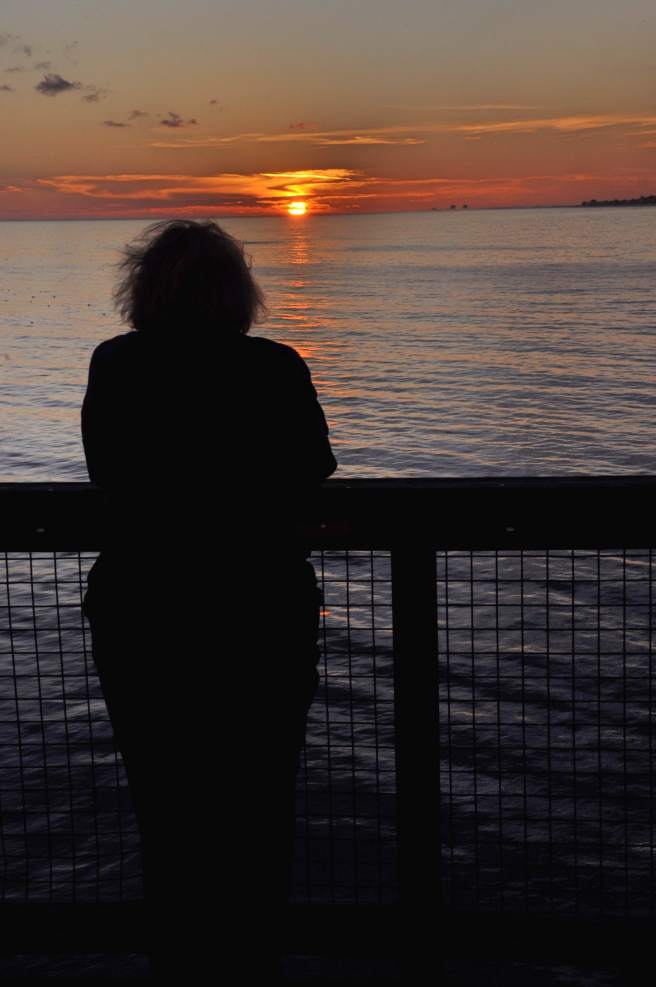 Milton was settled in the early 1800s as a small village centered on the lumber industry. The settlement was originally known as “Scratch Ankle” because of the briars and bramble that grew in the area. Milton was incorporated as a city in 1844, one year before the Territory of Florida joined the United States as the 27th state.

We went to the nearby city of Fort Walton to view the sunset over the Gulf of Mexico. They have a long fishing pier on which we walked  1/4 mile into the Gulf.

The Pelicans also liked the pier:

As well as the Blue Heron:

And, of course, the sunset: 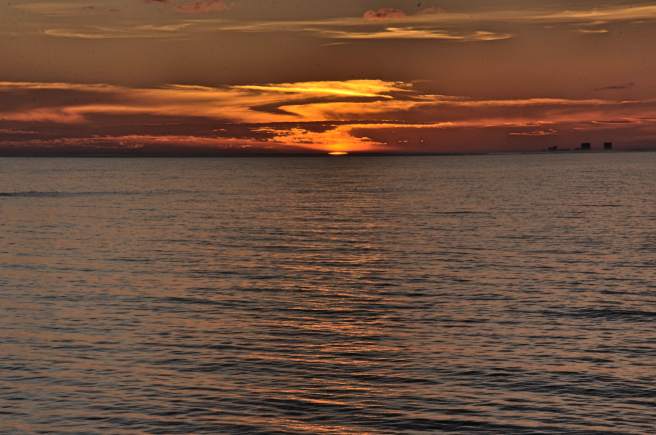 Lamont, Florida is an unincorporated town off of I 10. The only thing here is this campground and some gas stations and eating places. We are here as a stopover to Avalon, Florida, where we will be meeting with some of the group that we will be going to Alaska with, and then going to an RV Rally in Ft. Walton, Beach, Florida with them.

We were going to drive the 25 miles to Tallahassee, Florida, but then realized we were there on day 340. Until we looked at the blog for that day, we did not realize we had been there. Have we been traveling too much?

Our campsite featured a Blue Heron:

We came to Mount Dora to visit friends.

They took us to their friend’s house who had a direct view of launches from Cape Canaveral. We watched the SpaceX’s Falcon Heavy launch from the Cape. The payload was SpaceX’s founder Elon Musl’s red Tesla Roaster. 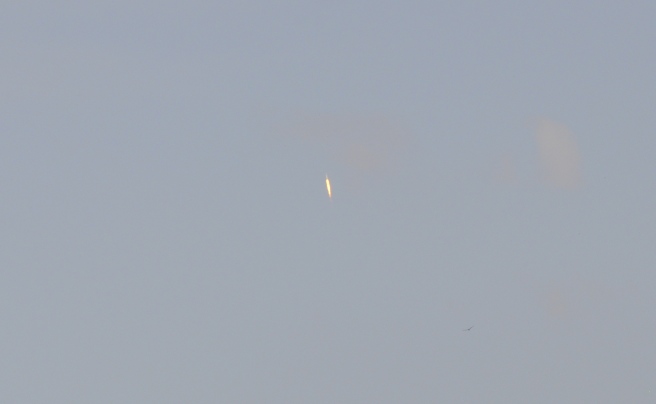 Enlarge the picture and see the Tesla through the space craft window.

Away it went, leaving only a vapor trail:

Dora Ann Fletcher was born on May 12, 1826 in Irwin, George. She married James Drawdy in 1843 and had 3 children. When he died in 1848 she married his cousin William and had 6 more children. She and her husband, William, wanted to live the frontier life. At that time Florida had recently joined the Union and was mostly unexplored wilderness. The Drawdy family built a raft and ferried their possessions down the Suwannee River and then by horse and wagon to Central Florida. William and Dora placed a claim on 164 acres near a large lake.

Dora befriended federal surveyors with her warm hospitality. In 1846, the surveyors named Lake Dora for her, and years later, in 1883, the small but growing town was named for the lake. The town’s name was officially changed to Mount Dora to reflect the fact that the settlement rests upon a plateau 184 feet above sea level – an unusual feature in Florida.

Visited the Mount Dora Museum. This museum is the location of the first fire station and city jail, which opened in 1923.

The exhibits highlight activities in Mount Dora from the 1880s to the 1930s. Like this old time mix-master:

Whether you lived or died, this guy made money:

He was an important figure in the conservation movement. Darling initiated the Federal Duck Stamp program and designed the first stamp. He was instrumental in founding the National Wildlife Federation in 1936, when President Franklin Roosevelt convened the first North American Wildlife Conference.

She pointed out various plants and trees, like this Gumbo Limbo tree, a native of South Florida. It develops unusual red bark that peels back – reminiscent of sunburned skin – which gives gumbo limbo the nickname of “Tourist Tree.” : 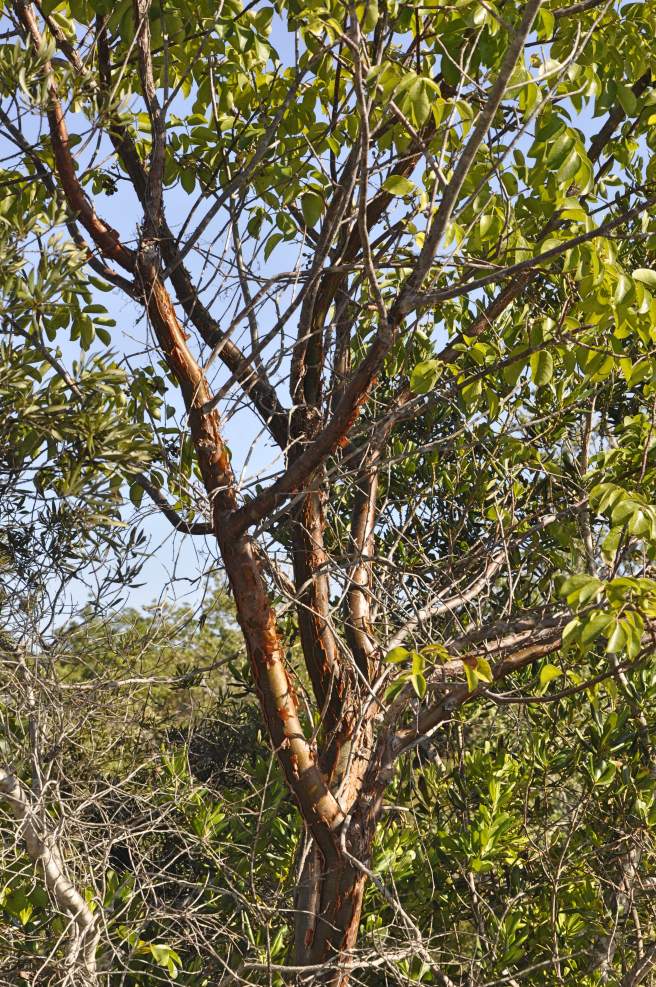 And this cabbage palm tree: 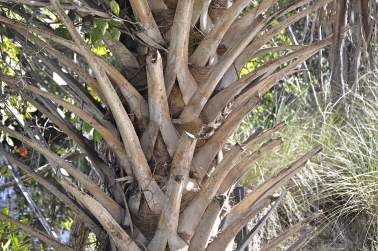 The spokes on the trunk of this palm are called boots. The name comes from when the area was cattle country. At the end of the day, the tired cowboys took off their wet and muddy boots and hung them on this stiff appendage to dry. 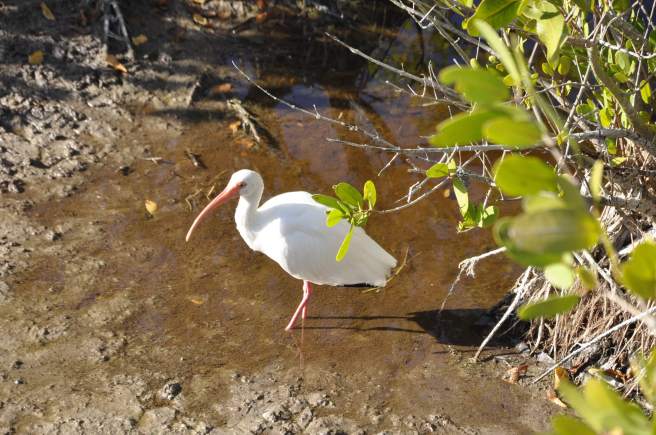 and this bird, which I already forgot the name

In 1885 inventor Thomas Alva Edison was cruising Florida’s west coast and stopped to visit Fort Myers. He soon bought 13 acres along the Caloosahatchee River because numerous bamboo trees grew there. He was using the bamboo fiber in his light bulbs, which he now had to import from Africa. Here he built his home, Seminole Lodge, as a winter retreat.

With WWI approaching, Edison and Ford worried about rubber production, and although most rubber was made in England, the US bought 70% of the world’s rubber. Edison planted many types of trees and plants from which he could extract latex, a key ingredient of rubber.

He built a laboratory to test over 17,000 plant samples he and his staff collected in his quest to find a way to produce rubber in the United States. His lab was preserved:

In 1927 he planted this banyan tree which produces a white milky sap (latex) which can be used in the production of rubber:

This is all one tree which was planted from a single 14″ stem.

This Brown Woolly Fig tree was planted in 1928, and now stands 102 feet high and 305 inches in circumference:

In 1916, automobile magnate Henry Ford purchased the home next door to Edison’s. We took a guided tour of both homes.

Tidbit of Information:  For a short period, Henry Ford worked at the Edison Illuminating Company. On an occasion of Edison visiting the plant, Henry Ford showed him his prototype of a gasoline engine. Edison gave Henry encouragement in pursuing the project. Henry, shortly thereafter, left the employ of Edison to form a motor company.

In the early 1900’s Ford and Edison took many road trips. In Ford’s garage on this estate was the first “RV” made for these trips:

It was a box containing food and cooking supplies on the back of a Model T.  Notice the water spigot on the side. Thank you Henry, otherwise I would not be traveling the Country. 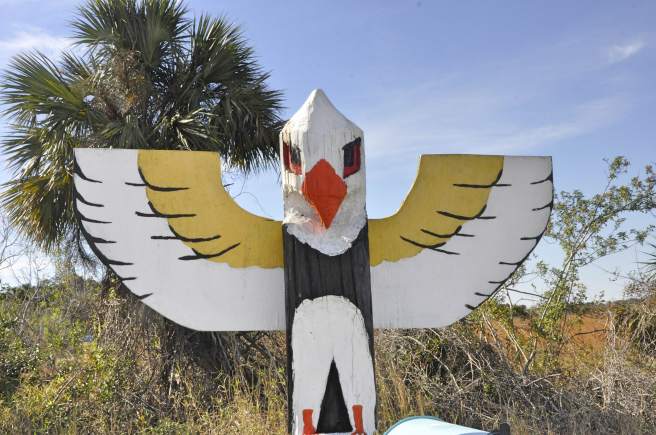 On the Indian Reservation, next to the casino, is the Seminole Veterans Building. The building is build in the shape of a 5 point star, like on the American Flag.

One point of the building covers the Seminole Wars, another, World War II, and a third, Vietnam and later. The remaining 2 points are administrative.

In the center of the star building, a pentagon, is located a 500 seat auditorium.

The staff of the building supports getting benefits not only for the Indian Veterans but all veterans. They concentrate on service connected disability compensation for exposure to agent orange. 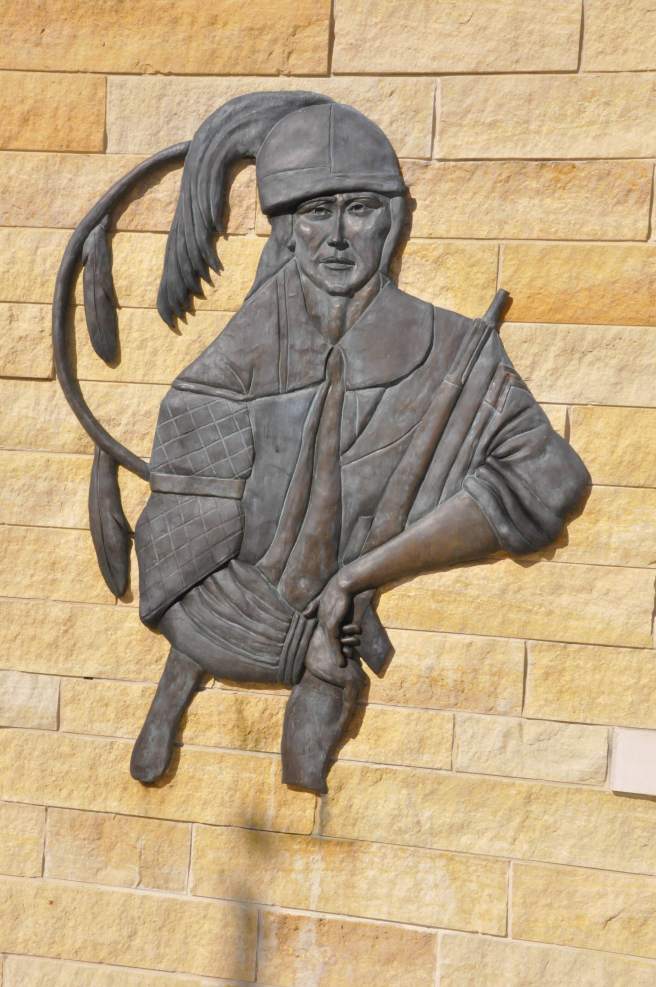 There is no Fort at Fort Myers.

During the American Indian Wars of the 1830’s the United States built Fort Myers as one of the first forts along the Caloosahatchee River. It was used as a base of operations against the Seminole Indians. The Government abandoned the fort following the Civil War.

The Fort Myers community was founded by Confederate Captain Manuel A. Gonzalez on February 21, 1866. On August 12, 1885, the small town of Fort Myers—with 349 residents—was incorporated.

The city is named after Confederate Colonel Abraham Myers, a Jewish American army officer and a graduate of West Point, Class of 1833. He was descended from Rabbi Moses Cohen, an emigrant from London to Charleston, South Carolina.